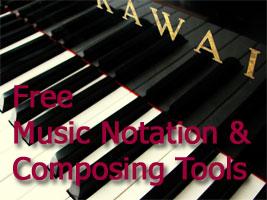 Free music notation software is not the easiest tech to come by.  While you can find hundreds of games, applications, and other mindless pursuits to install on your computer for free the act of writing and printing high quality music notation for free is much more difficult.  The percieved need for free music composing software just isn't there, and the big name music notation companies are not about to give away their flagship products for free.  But if you are not in the mood to pay three to five hundred dollars for a full blown commercial package do you really have any options?

There are several companies out there that offer free music writing software packages.  You have probably heard of the big names like Finale Notepad (see more below) and the online free music notation editor Noteflight, but there are other cubs in the pack that may also fit your needs.  The biggest problem with most of these free music notation programs is that in most cases the free or shareware versions are crippled or stripped down in some way.  Take  the aptly named Free Music Composer software.  The free version of the program allows you to create only eight (yes...  EIGHT!) bars of music on a single staff.  The upgraded shareware version can handle a whopping 255 bars.  Another example is the Anvil Studio.  More of a sequencing package than a dedicated music notation program Anvil is much more robust than the Free Music Composer, but still leaves much to be desired.  Anvil Studio allows you to record audio directly into the program (from a guitar for example) but the free version limits you to one minute of imported audio.

Free Music Composer and Anvil Studio really are at the low end of the market though in terms of usability.  If you want to print high quality music notation files for free then you have to look to the more geeky or commercial offerings shown below.

Free, High Quality Music Notation Available Now...  If You Can Figure Out How To Use It...

At one end of the high quality spectrum are products that rely on the free Lilypond music notation program, but finding robust WYSIWYG graphical interfaces for it is still a problem. What is the big deal about the Lilypond music notation software?  Unlike most other free competitors files made in Lilypond come out with beautiful engraved quality prints.  The layout and accuracy of the rendered music in Lilypond is amazing, and even beats that of some of the commercial music notation software packages.  You can see examples of the great quality of Lilpond by looking at scores available through the Mutopia Project .  The problem?  The Lilypond format is a text based format.  That means that entering notes into the system is done by typing a text file, not by clicking and dragging notes around a screen.  There are a few GUI based notation editors for Lilypond out there named Frescobaldi and Denemo but they are still more for the true software enthusiast rather than a novice, weekend musician.  Luckily there are other, much more user friendly options available in the free music notation software market.

Whereas a five years ago you were really limited to one or two contenders in the high end free music notation arena today you have several and in the quality of the output of some of these programs now rivals that of the big name commercial brands like Finale and Sibelius.  Here's a run down of three of my favorite music notation titles and suggestions of whether they are the right choice for you. 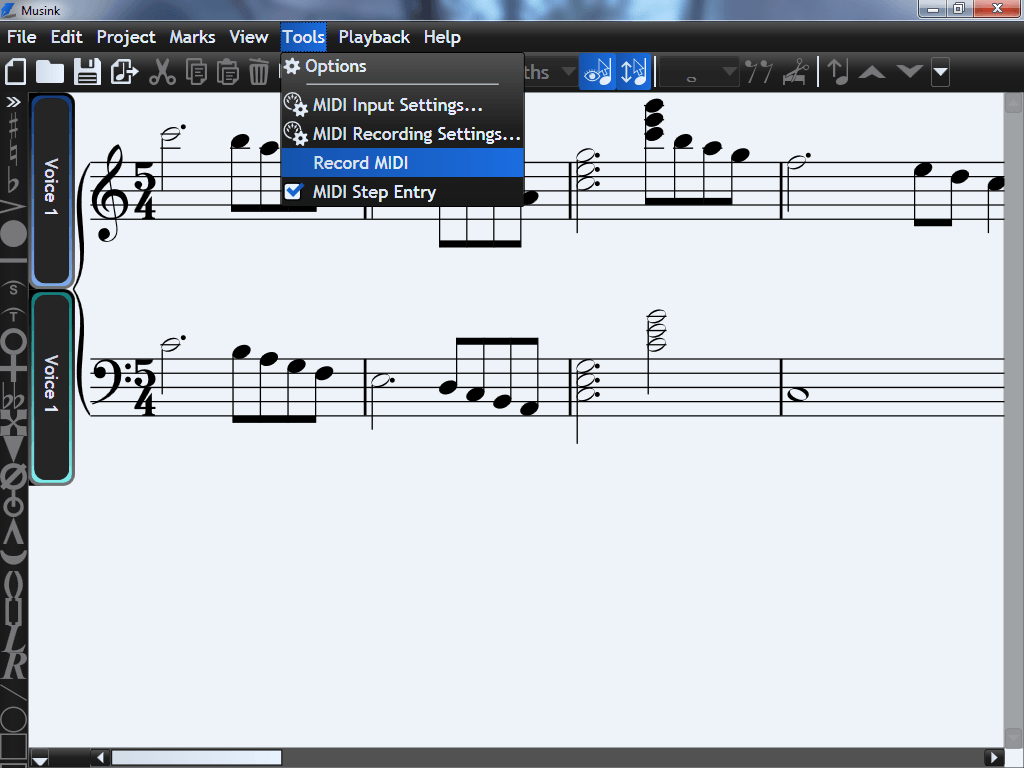 MusInk is a newcomer to the music notation world and they don't seem to have a problem with breaking the mold on how things have to be done.  The biggest thing you will notice when taking MusInk out for a free test drive is that entering notes into the system is completely different than any other music notation program that you might have ever used.  Rather than having a standard set of note duration buttons that you select then click into place in the music with MusInk note duration is controlled by WHERE you place the note in relation to the previous ones. The farther to the right that you place the next note the longer the duration of that note will be.  If you place two notes at the beginning and then halfway through the bar you get two half notes.  If you put a string of notes close together you get eighth or sixteenth notes depending on how you have set your defaults.

While this new method sounds a little confusing it makes perfect sense once you try it, but be forwarned it takes a lot of getting used to.  Like I said MusInk breaks the mold, so be prepared for a steep learning curve.  Also, due to its relative newness also be prepared for some bugs.  In my recent testing (as you will see in the video) crashes are an occasional annoyance.  Just save often and keep trying though and you'll find it isn't a bad little free music notation alternative.  MusInk runs on Windows only.

Even though Finale has not updated Notepad since 2012 it is still one of the most popular free music notation programs out there simply due to the fact that any music you create in the program is forward compatible with any of the more professional versions of the Finale line of software.  If you start with Finale Notepad 2012 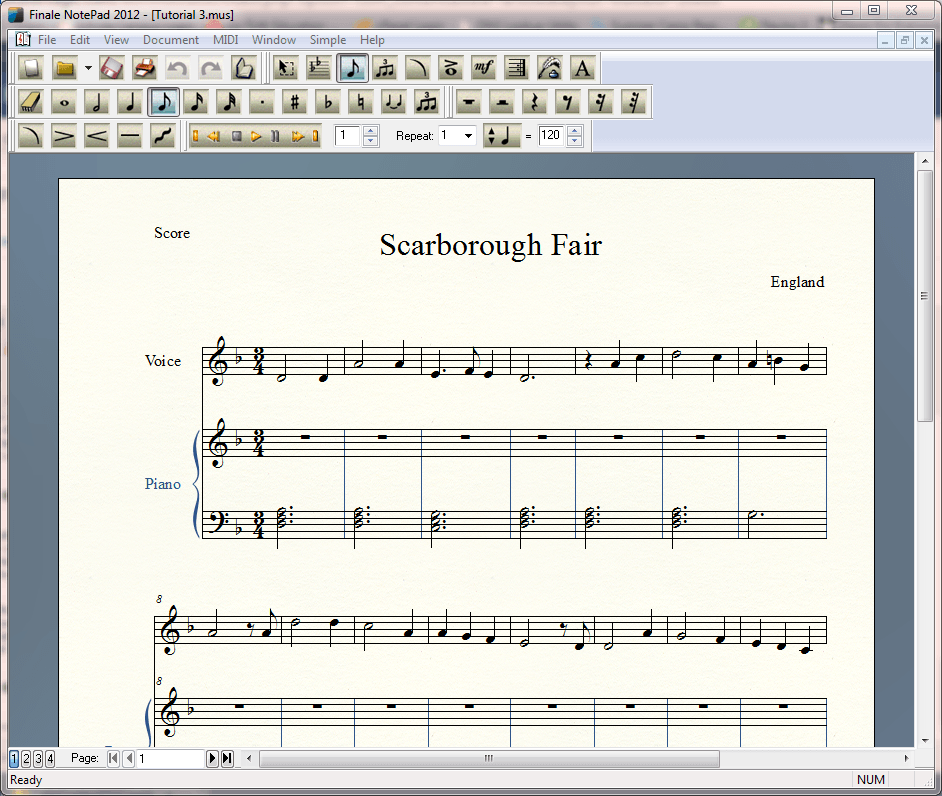 you can later open that document in Finale Songwriter or even the full commercial version of Finale and then continue editing without losing any data.  Likewise a teacher can be using the full version of the software and any files he or she creates as an assignment can be opened in Notepad, allowing a student to do their music homework for free at home.

Finale Notepad is not perfect though, and it is an extremely stripped down version of it's very blue blooded older sibling, Finale 2015 , Notepad still offers one of the best free music composing experiences out there right now.  It can be downloaded directly from MakeMusic.com's web site, or it can also be installed from the DVD's included with several different beginner band method books such as Essential Elements 2000.  Notepad can render multiple staves and seems to have no limit on length.  The tools are very standard, and the interface rather stark, but Notepad gets the job done and with printouts that are at least acceptable in quality.  Finale Notepad is free to download and it runs on Windows and Mac. 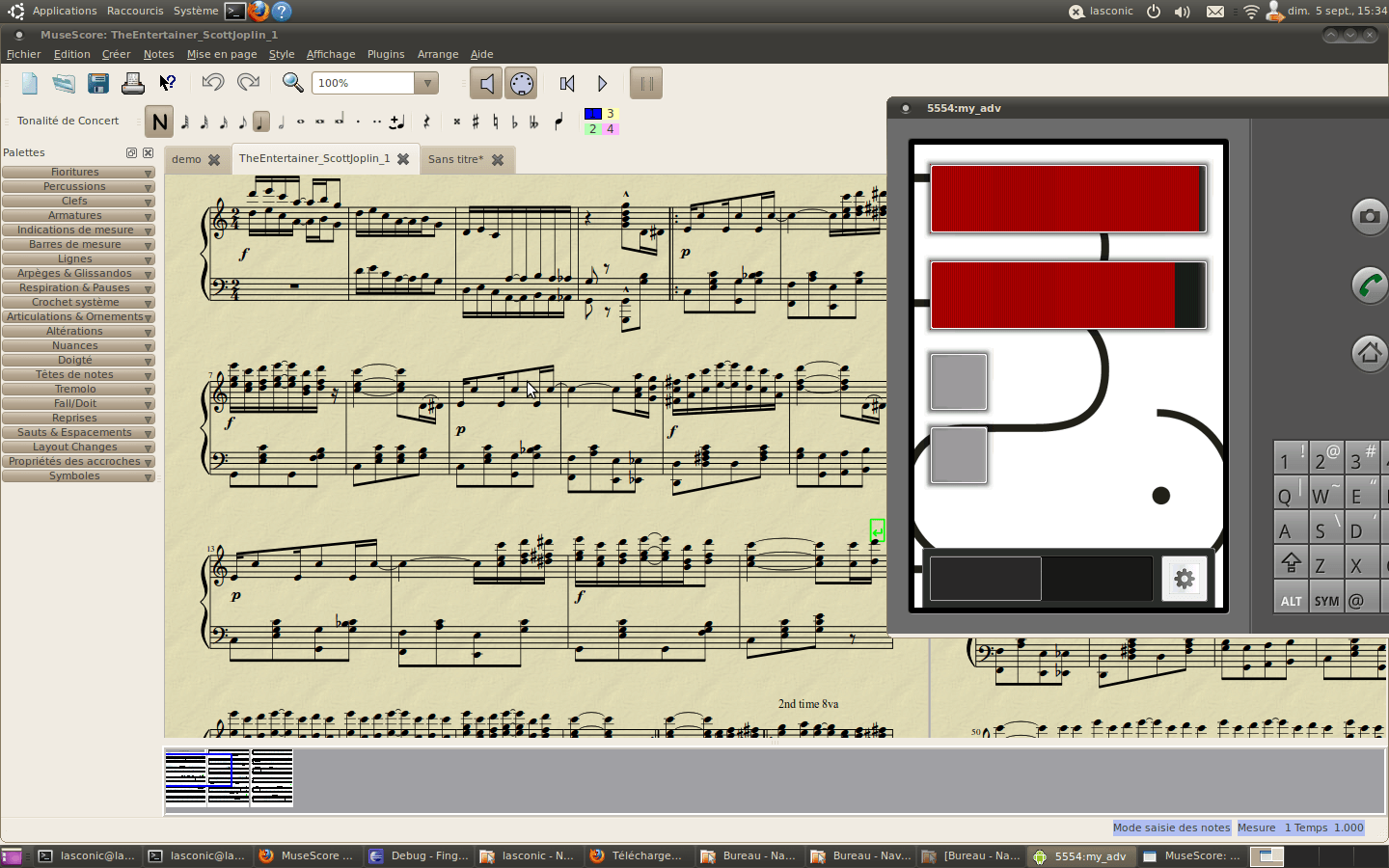 At the top of the heap is a contender that was not even around when I first started writing about free music notation software back in 2007.  In just the last few years MuseScore has come from an upstart open source music notation program to a full blown, near professional level way to write music for free.  While not as polished as Finale or Sibelius, MusScore still has almost all of the features that the big boys do and they provide them at the low low cost of FREE!.

In using MuseScore you'll find that most of the common sense intuitive music entry methods work pretty much as you would expect them to, and unlike some of the free music notation programs you can use MIDI input and other methods to get your score started.  Playback functions are decent but don't look for the highest quality sound fonts to playback your creations with.  Still, it's free, it's solid and dependable, and it is constantly being updated and improved on by a worldwide cohort of music savvy developers who donate their time to add more features.

All that being said, MuseScore has become so feature packed that for some users it may be complicated overkill.  If all you need is to put down a few lines of music in a neat, easy to read format then Notepad might be sufficient.  If you want full power though take MuseScore out for a spin.  It's a free download and it runs on both Windows and Mac.

Note:  The articles on this site may contain referral links to sites such as Amazon and other online retailers.  The small amount of income received from these links has helped keep MusicEdMagic.com up and running for over ten years now.  Thank you for your support!